How to Recruit a Representative Sample 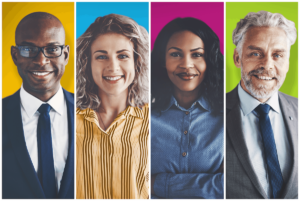 As researchers, you’re aware that your study should conduct research on a diverse group from the population that it’s supposed to help. And this is mainly because there can be differences in results among people of different ages, races, ethnic groups, and genders.

As an example, some African Americans need smaller doses of the preventive treatment for blood clots—warafin, compared to their Caucasian counterparts.

But how can researchers succeed in recruiting a representative sample? The hardest part is getting your ads in front of those who are underrepresented in your study. If finding diverse participants might induce some mild forms of anxiety, don’t worry, there are a few steps you can take to make sure you recruit your representative sample.

In this article we’ll take you through how to recruit a representative sample using digital advertising, running separate ads to target different demographics, and how collecting relevant demographic information at the beginning of your study can help you recruit the sample you need.

Digital advertising makes it easy to target specific demographics, and so, securing a representative sample is more straightforward than it has been through traditional advertising.

Plus, digital campaigns are also easier to create and manage. Campaigns can be duplicated with ease, and messages personalized with the relevant information. For example, if your study targets both females and males, you can run two separate campaigns with different images and headlines, geared toward the two different demographics.

The first step in getting a representative sample is to make sure you’re collecting relevant demographic information during the sign-up stage of your study. That way you can see what demographic shortfalls might be surfacing.

There’s often a delay, sometimes in days or even weeks from the time people enquire about a study to the time they actually enroll. And if you wait to evaluate only those who enroll, then it might be too late to identify the demographic shortfalls. The trick is to be more proactive and start collecting information from initial enquiries or sign-ups.

Thankfully, online advertising makes it easy to target specific demographics and lets you see exactly which you’re neglecting. For example, if you notice the campaign targeting young women is overly successful, you can pause it and create new campaigns which target men, older women, and so on.

If you’re a researcher, and you’re likely to be if you’re reading this article, there’s no doubt that you’re very familiar with why representative samples should match the general population as closely as possible.

The best method in how to recruit a representative sample in advertising is to catch the attention of a diverse group from the start. So if your eligibility criteria targets patients with a wide age range (e.g. patients aged 18 to 50) in a specific area, you’ll want to target people of different ages, ethnicities, and socio-economic status instead of just running a single catch-all ad.

There are a number of ways you can target different demographics through online advertising. We’ve listed some of them below.

Age is often the easiest targeting option in online advertising. Age demographics are available to anyone using the Facebook advertising platform, it also asks users to enter their birthday when they sign-up, as do other social media platforms.

Search platforms like Google may intuit the rough ages of their users by examining their search browser history, though they’re often less accurate than social media. So if you notice your recruitment is deficient in a specific age, you can easily create a separate campaign that focuses on that age shortfall.

Gender is easily targetable via social media advertising platforms. If your eligibility criteria target both men and women, make sure you run two separate recruitment ads that focus on each gender.

Most online advertising platforms will allow you to target people based on their location or their interests in a particular region or city. Though not always reliable, geographic locations can decode people’s socio-economic status, when dealing with specific inner-city areas or neighborhoods.

If you have a large geographic area to play with for your study, make sure you’re targeting those who live in rural areas as well as cities. This will certainly help with finding a more representative sample.

Most online advertising platforms like Facebook will allow you to target people based on their income bracket. But, since Facebook most likely uses third-party partners to assess this information, beware—it may not always be accurate. If you’re recruiting volunteers with a specific socio-economic status, you might be better off looking at education options.

Advertising on social media often means you’ll have the option of selecting an array of educational levels to make sure you’re targeting the people you need for your study. All the way from high school to post-graduate degrees.

From a statistical point of view, education tends to correlate strongly with income. Often, the higher the level of education an individual has, the more they tend to earn. Of course, this isn’t always a given, but it’s usually a good indicator.

Sometimes there can be a disconnect between the makeup of the population and diversity representation in clinical trials. In the US, for example, Caucasians are often over represented and minority populations, such as African Americans and Hispanic people are underrepresented.

There have been instances in the past where approved medications resulted in being ineffective for people of certain ethnic backgrounds once it was released and used by a diverse population. An example of this is Plavix; a drug that is typically used for serious vascular issues. Plavix was approved in 1997, but later it was found ineffective in three quarters of Pacific Islanders and half of the Asian patients it was used on because they lacked the enzymes that were needed to activate it.

In more recent years, the FDA is aiming to make the demographic data of drug trials more available. Their page Drug Trials Snapshots offers information on the participant demographics for the medical research of FDA approved drugs.

Ethnic targeting is a contentious issue in advertising. From the many ways we’re able to target specific groups through online advertising tools, there are also many problematic issues, such as Facebook’s ‘ethnic affinity’ feature.

If you need to reach out to a specific ethnic group to recruit a representative sample there are other data and tools you can put to use other than those that social media platforms provide.

Below, we’ve listed several ways you can make sure you’re targeting various ethnicities without depending on unreliable (and dubious) advertising tools.

Even if the individual you’d like to attract as part of your sample is bilingual, making sure the ad is in their native language will make it a more comfortable line of communication for them. A native Spanish speaker, for instance, would be more comfortable signing up through a Spanish web page and form, since you’re catering to them in their natural language.

Having an individual on your team who’s fluent in the language that your target participants speak would also help. This will boost your study’s credibility, make your patients more comfortable, and so they’d be more likely to take part.

Be Welcoming in Your Ads and in Person

Cater your ads to the population you’re targeting, and be as diverse as you possibly can to get the most representative sample you possibly can. To do that you can use multicultural imagery in your ads for instance.

Certain ethnic populations may be more dubious of research, and so demonstrating credibility is very important. University logos especially, but generally logos as a whole, can help add credibility. Adding a professional logo with the full research institute name will mean that people are more likely to trust you and sign up to participate in your study.

Add a personal element in your recruitment advertising or the extra information you offer participants by telling them a little about the researchers who’ll be working on the study. This helps to build a personal connection with them, and it also elevates your credibility. Give your name, your role, links to any of your relevant professional profile pages (such as your university page, LinkedIn profile, etc.), and most importantly, add a photo of yourself!

If you have a diverse study team, even better—it makes your study seem less intimidating and will make people more likely to enroll.

We’ve covered the ways you can attract potential patients by being more personal, and presenting the credibility of your study in a lot more detail in our enrollment guides.

Don’t Do It Alone

While achieving a representative sample is easier with online advertising and digital campaigns, it can be a daunting task, especially if you’re unfamiliar with the various advertising options, the ad management platforms, and have a limited budget.

How to recruit a representative sample can depend on running multiple campaigns, creating a number of personalized ads for each target demographic, and keeping track of all the results to make sure you’re not missing a specific group.

But you don’t have to go at it alone—there are always experts that can help. The best way to make sure you’ve captured a representative sample is to work with experts who can manage the nitty-gritty advertising details so you can focus on your research.

I thought this article, How to Recruit a Representative Sample, might interest you.