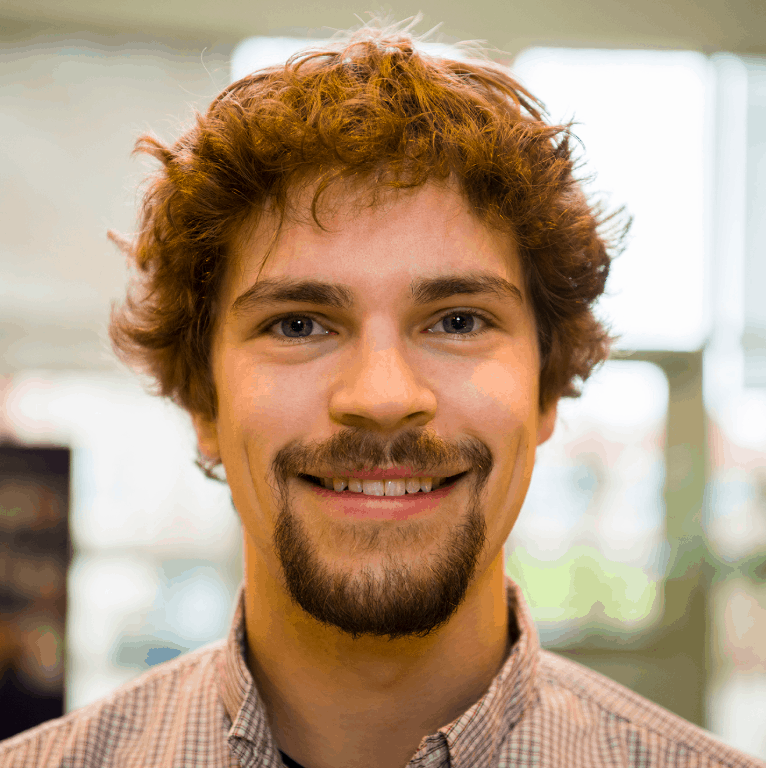 As he attempted to recruit patients for a study on depression and PTSD, Jeremy was overwhelmed with a high number of responses that translated into a low number of qualified patients.

At the same time, he was unable to reach qualified patients where they were: in their homes. Ultimately, Jeremy found that a good recruitment process can be complicated — but it needn’t be difficult.

Like the Emerge Research Program, clinical trials rarely face just one challenge. For a detailed report on how you can overcome multiple challenges of your own on clinical trial recruitment, we can run your study through our free Due Diligence process.

Jeremy was recruiting for an on-going Yale study on the brain chemistry behind both depression and PTSD. ERP, which operates under Yale University, also partners with Veterans Affairs to study PTSD.

The study is investigating whether a different ‘type’ of depression exists, where an imbalance of a chemical other than serotonin is contributing to depression symptoms. If another type does exist, specific treatments can be developed to address these imbalances and help people who do not benefit from existing antidepressants. 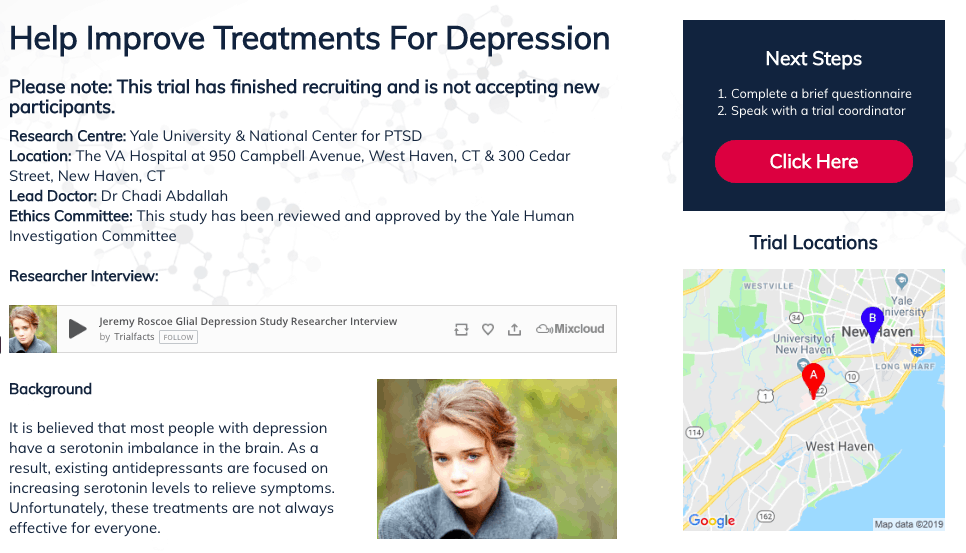 Landing page for the trial designed and created by Trialfacts

“We’re looking into trying to unlock more of what’s happening in a biological perspective with these disorders and if that could then form different types of medications to help the people,” Jeremy told Trialfacts in a recent interview. “It’s possible that say there are two people with very similar symptoms, but could have two drastically different things going on in their brain and maybe one responds well to current antidepressants and some respond to others.”

The study has been running for four years but had been neglected more recently until Jeremy was tasked with recruiting more participants. Before the new start, the study ran 20 participants over the course of two years. In the following two years, the study needed to ramp it up to 50 participants, at an average of two per month.

The study population had to be within a fairly local vicinity because of the number of clinical visits volunteers were required to make. Because of this Jeremy’s process was limited to local recruitment methods. His initial recruitment efforts looked promising at first. He started by advertising the study on Craigslist. In a matter of days, he had a number of calls and emails rolling in.

But this wasn’t the kind of response he was looking for. “It was more people who took the time out of their day to go on to Craigslist and look for paid studies,” Jeremy told us. “So they didn’t always match the eligibility criteria that they said they would.” This meant he had to handle a high number of calls and emails regarding the study, but came up with very few actual participants. The Craigslist approach came with a “very, very high quantity of research participants of very low quality.”

“The challenge is it’s a pretty narrow window with these studies as far as our eligibility requirements,” Jeremy told us. “You get a lot of people that could be great. And then they said that one little thing that rules them out. A lot of little pieces that come together and if you miss one of those little pieces it just rules you out entirely.”

At the same time, Jeremy counted on flyers posted around New Haven, Connecticut, as well as spreading information about the study via word of mouth and physician referrals. This approach had a better response, but presented a new challenge: he couldn’t recruit an adequate number of patients suffering from depression by relying on methods that required them to be out of their home.

“If you have someone that’s staying in their house all day, no matter how many flyers or referrals or stuff we give, we’re not going to reach them,” Jeremy said. “If they knew about the research, they would really want to help us out. But they just don’t know about it and we don’t know about them.”

With these initial efforts, Jeremy had two seemingly opposite problems: he had a high number of interested people but a low number of qualified patients.

A New Beginning With a Clear Recruitment Plan

ERP had already been working with Trialfacts for other studies focused on PTSD when Jeremy was brought on board. Once he realized Craigslist efforts weren’t panning out, he decided to give Trialfacts a shot.

From the beginning, Jeremy was happy to get a new start to improving recruitment efforts. “You guys were really great to work with, just always answering all the questions I had,” he told us. And that was just to get the ball rolling. As part of Trialfacts’ Due Diligence process, before actual recruitment, we forecast the number of people that we will reach and how many will enroll.

This provided Jeremy with some realistic expectations: “It was acknowledged that a lot of these people will fail out, and I’m sure you guys have plenty of experience to back those estimates up.” 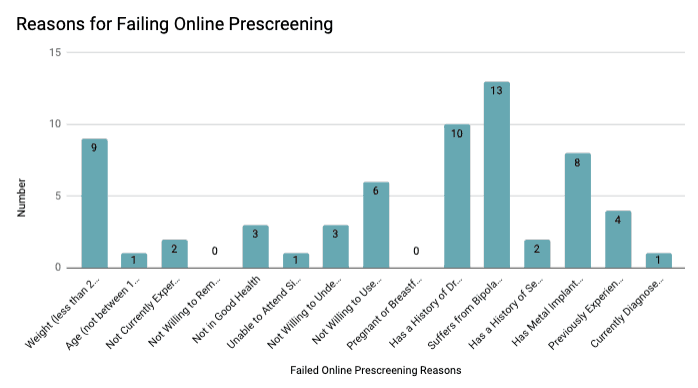 The big difference for Jeremy was with the outreach and prescreening process, which simultaneously provided him with more candidates and more qualified responses. 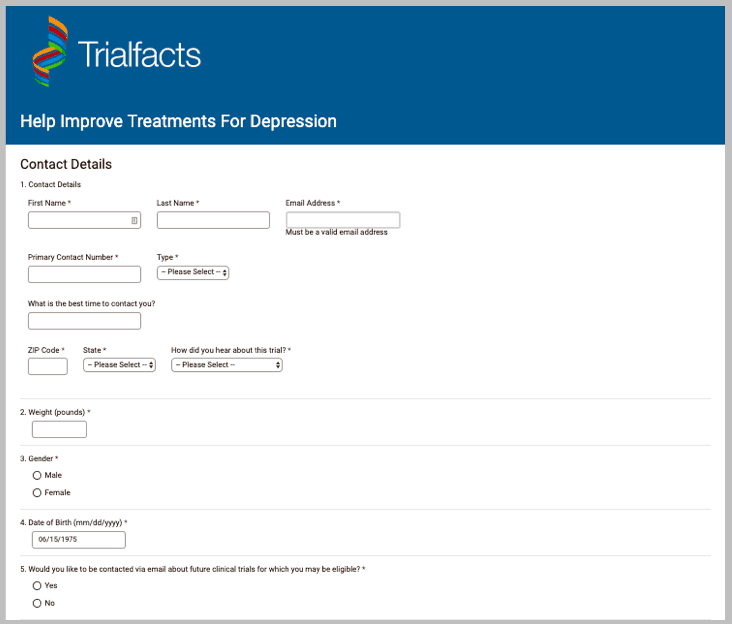 “Trialfacts was big on getting those people that otherwise I had no means of getting to,” Jeremy told us. “The most helpful was definitely just finding a list of people who are interested in the study.”

Our expertise in reaching a specific population also made for more engaging marketing materials for the study. With Trialfacts’ social media advertising plus the dedicated landing page for the study, ERP was able to reach many more interested people. “It was all very well catered to and put together well,” Jeremy said. “It was impressive.” Through specific ad targeting, we were able to limit the ads to the local population that ERP needed for the study. 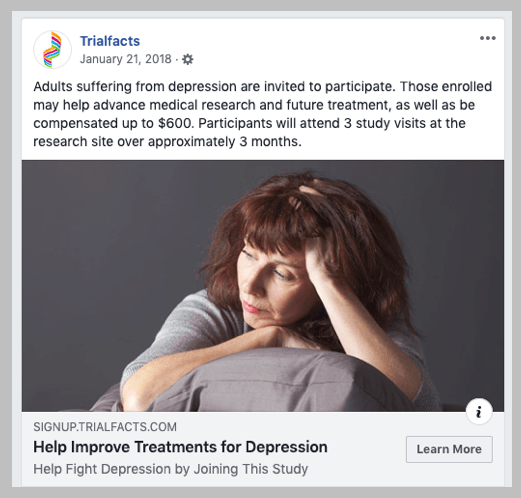 But reaching people wasn’t the only issue Jeremy had faced. The bigger challenge was finding candidates who were actually qualified for the study.

“With Trialfacts, the best thing is the prescreen quiz,” Jeremy told us. Before, he would generally have to wait until the phone interview to find disqualifying information, wasting both his time and the candidate’s. “It’s nice that we can clear a lot of that out with the Trialfacts quiz,” Jeremy said.

The prescreening process also worked as a two-way street, providing information about candidates, and providing the candidates with better information about the study. “We have info about them before they come in, but they are also given a whole bunch of reading materials about what we’re doing.” This was what created the most significant improvements for Jeremy in contrast to flyers, word of mouth, and referrals.

“Once I got going, people started coming in and it was pretty straightforward,” Jeremy told us. “I think our first five people that Trialfacts referred all went through the study — that was a cool initiation.”

More than anything, partnering with Trialfacts saved time, simplified the patient recruitment process and provided a clear avenue for communication on what would boost participation.

“There’s a lot of stuff that goes into these studies, involving the data entry and management and all the coordination,” Jeremy told us. “To save time on recruitment and with the pre-screen questionnaire has been really helpful.”

Having all of the relevant information easily available made the process much simpler as well. “The spreadsheet with the list of all the people is super convenient,” Jeremy said. “It’s just a great place to store all that information without having to bounce it all around in your head.”

At the same time, the Trialfacts team actively helped Jeremy manage candidates as they rolled in. When the volume became overwhelming, Trialfacts began sending referrals in smaller batches — and walked Jeremy through how to schedule phone screenings ahead of time to stay organized.

From start to finish he enjoyed working with the Trialfacts team: “Everyone’s very clear and straightforward in their emails. They all just seem very bright and cheery.”

Meeting the challenges of clinical trial recruitment can be complicated — but it doesn’t have to be difficult for you. “I would say outsourcing recruitment is going to make your job way, way easier, because that’s how big the stress on my end was,” Jeremy concluded.

With due diligence, effective prescreening, good clinical trial advertising and great communication, Trialfacts lifted the stress of recruitment and retention for the team at Yale University.

I thought this article, From Frustration to Facilitation: Yale Study Overcomes Clinical Trial Recruitment Challenge, might interest you.