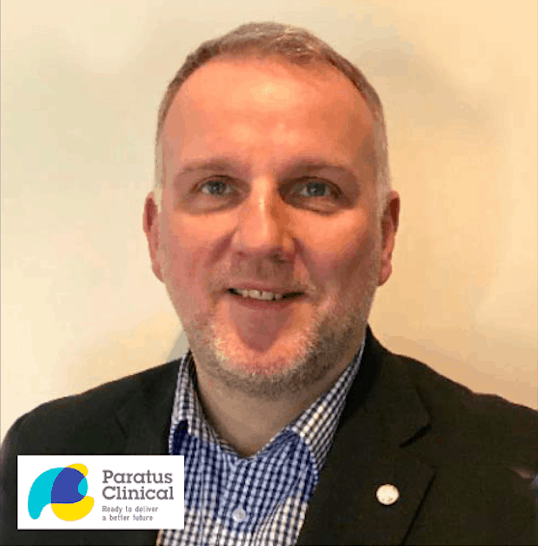 Clinical trial patient recruitment is an art, not a science. But that doesn’t mean crunching numbers isn’t a critical facet of successful enrollment.

Paratus Clinical recognized this from the start, as they began considering ways to recruit their patient population. They found a way to recruit as many participants as possible while also putting their sponsor’s funding to use wisely.

In a recent interview, Paratus co-founder Matt Clacy shared how the Paratus team used a variety of recruitment methods. Applying an ROI analysis for each method led them to an interesting discovery.

You can see how this might work for your study — ask for a patient forecast with a guaranteed return on investment from Trialfacts. An example graphic is below.

For more details on how we helped Paratus meet patient enrollment, keep reading.

As they geared up for a study on a new means for identifying acute sinusitis, Paratus needed a winning strategy for clinical trial patient recruitment.

The study goal was to test the efficacy of a new method for diagnosis of acute sinusitis. Matt told Trialfacts that the new device would allow a General Practitioner to run a test in just 20 minutes, once approved. The GP would know with “a much greater degree of certainty whether the patient had a bacterial sinus infection, and at that point, the doctor and patient would be more confident in the prescription of antibiotics or not.”

Paratus was tasked with recruiting up to 100 study participants, which would compare the results from the new point of care device to the results that would be sent away to the lab for routine analysis.

Matt and his team knew the study would face a unique challenge from the beginning, mainly in distinguishing those with acute sinusitis and those with a chronic condition. Anyone who had symptoms of sinusitis for longer than four weeks or had been diagnosed with chronic sinusitis would not be eligible. This made the window for recruitment quite narrow.

At the crux of successful recruitment was a prescreening question posed to interested patients and designed to either qualify them or exclude them based on the acute vs chronic diagnosis. The major challenge, Matt said, was “people’s inability to be screened with success digitally and even sometimes over the phone, prior to attending the visit. We needed to be less medical, more lay person when asking key questions.”

At the same time, Paratus had to recruit the highest number of participants possible without going over the sponsor’s limit.

To address these challenges and the unique demands of the study, Paratus took on a variety of clinical trial recruitment methods, including engaging with Trialfacts.

Getting a High ROI for Patient Recruitment

Matt and the Paratus team engaged with both Trialfacts and another clinical trial recruitment vendor. “We also did some leaflet drops in the local area, and we did our own internal outreach,” Matt said.

Then, it was a matter of determining which approach had the best ROI for Paratus and their sponsor. “It’s based on a return on investment for any vendor,” Matt said of the way each approach was analyzed. “We look at the money that’s been spent versus the revenue that is generated as a result of that.” Process and customer service is also important, Matt said, “but the commercial return on investment is obviously absolutely critical to us and our sponsors as to whether it’s a worthwhile investment.”

So how did each patient recruitment avenue work for Paratus?

With the locally dropped flyers, Paratus enrolled only six participants in the study. “It’s quite expensive and hasn’t been very productive,” Matt said. “We’ve done that for a couple of studies and not had a great response.”

The secondary recruitment vendor referred 65 people to Paratus. “Of that, only 11 booked in and then only seven turned up,” Matt reported. “It’s not a great return on investment.”

With Trialfacts, Paratus saw the best ROI by far. The Trialfacts team referred 54 screened patients, with 21 patients joining us for the in-person screening and 15 enrolling in the study.

Engaging in Due Diligence for the Highest ROI

Numbers like those above are a good indicator of a successful clinical trial patient recruitment process, but that’s not all there is to it.

Behind the high ROI Trialfacts achieved for Paratus was a due diligence process that ensured the high engagement rate of prescreened potential participants. Due diligence and Trialfacts’ tailored prescreening approach served as the foundation to this high return, giving Matt and his team clear expectations and the opportunity to give feedback ahead of time.

“I was pleasantly surprised at the way you guys approached costing, the development and the suggestion of the solution you were going to provide. There wasn’t a standard proposal,” Matt said of the initial due diligence process and the bespoke way in which Trialfacts considers each study for recruitment.

With that key process in place, we were not only able to provide Paratus with qualified candidates, but also make a detailed plan for how to go about recruitment based on the study’s unique challenges. The final breakdown saw an overall enrollment rate of 28 percent 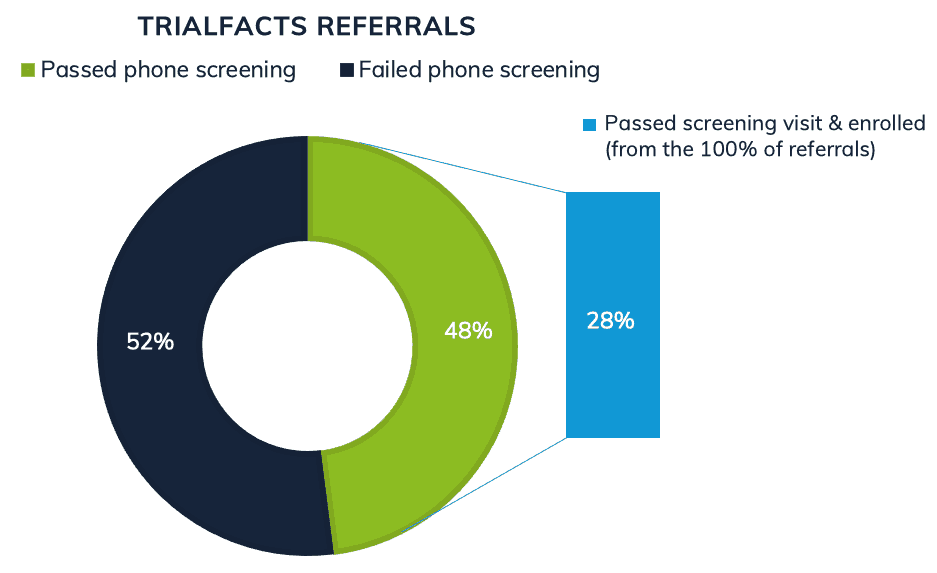 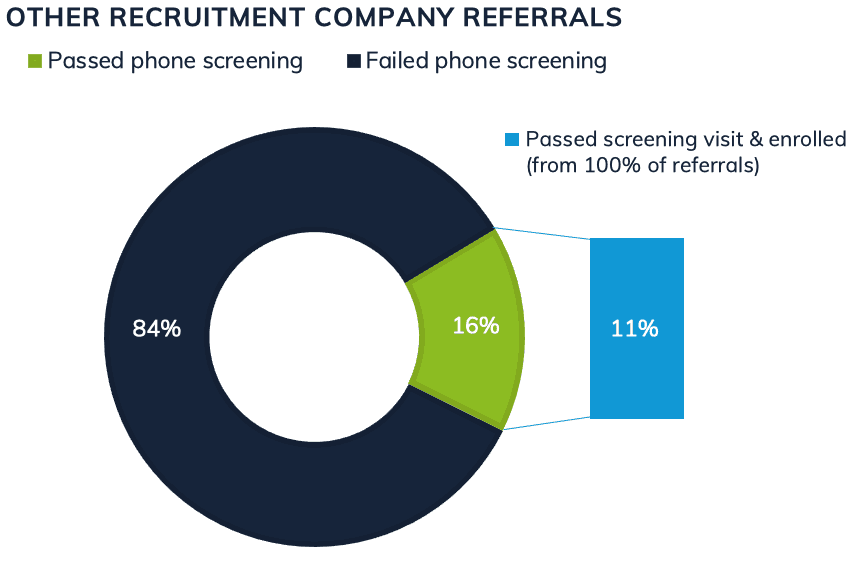 “The thing that we really liked was that of the 54 people that were pre-screened and booked into telephone consultations, we spoke to 49 of them, which is really significant,” Matt said. “The dropout rate between pre-screening and communication was very, very low, which was excellent.”

As you can see in the graphic below, one of the main factors that participants failed the online prescreening questionnaire was due to their recent diagnosis of chronic sinusitis — one of Matt’s concerns from the start.

Much of the due diligence process is designed to get the prescreening questions exactly right and the excluding factors dialed in.

The result? A lower than average dropout rate. Paratus spoke to 49 of Trialfacts’ 54 referrals, and 21 of the 26 who were booked for the in-person screening attended. As Matt said: “The number that were pre-screened versus the number we talked to was very high, much higher than anybody else.”

“The development of the material was quick and the communication was fast,” Matt told us in the interview. “Having gone through the whole experience with Trialfacts now, one of the things I like is the speed of communication and the engagement with us as a client.”

Working primarily with Melinda Gomez, Trialfacts’ New Client Coordinator, Matt and his team were able to stay updated with the recruitment process in real time. They provided feedback on the prescreening questionnaire, had ongoing access to the recruitment spreadsheet and saw when responses rolled in. “It’s easy to pull metrics from your system in terms of the numbers and from the reporting,” he said. “We reported back to the client and it was very easy to give feedback on how things were going through Trialfacts’ advertising because your systems lent themselves very well to that.”

“The communication is clear, it’s easy to do, the development of the material happens in the timeline that you’ve given. The process, when we came in to do the actual advertising and the patient contact, was extremely obvious and well organized,” Matt said. At the same time, the hands-on approach allowed Paratus to see how recruitment was going and make tweaks along the way, such as the moment when a number of screen fails were registered, Paratus suggested a change in the criteria questions which Trialfacts implemented immediately.

Paratus was able to use Trialfacts’ referrals for a higher enrollment rate compared to its other strategies. As Matt made clear from the outset, it came down to the ROI for Paratus: “We’ll advise sponsors to invest money on things that deliver, not just because they’re cheap.”

I thought this article, A Great ROI: Meeting Enrollment for Clinical Trial Patient Recruitment, might interest you.