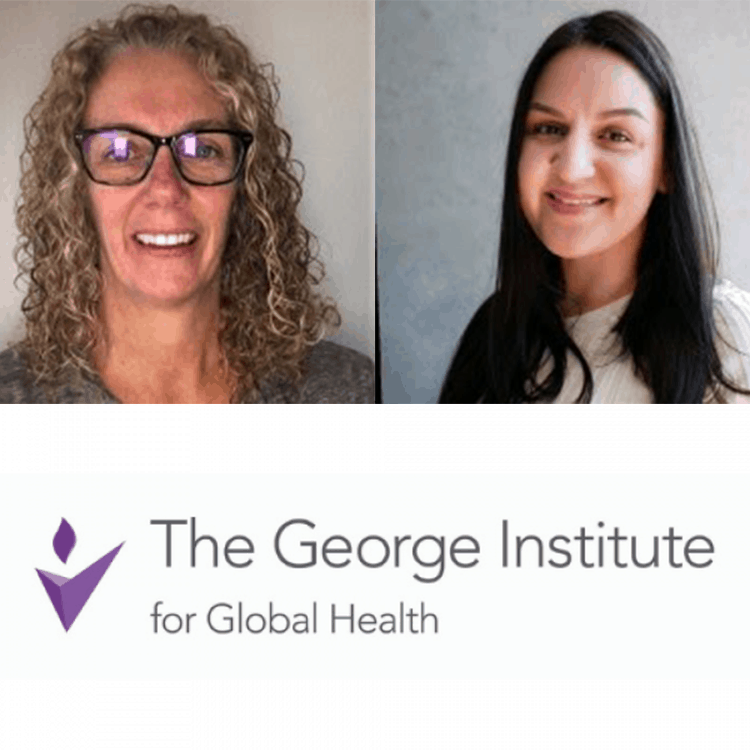 Tanya Badal and Dr. Allison Humphries have been working together to detect chronic obstructive pulmonary disease (COPD) in smokers.

When the two researchers joined a respiratory study in 2017, they knew they’d have trouble with recruitment due to unusual participant eligibility requirements.

But soon after experiencing some positive recruitment activity, they realized they had another issue: Keeping participants on through the end of the study.

After trying a number of traditional recruitment options, they discovered they needed to take a different approach to recruitment in order to be successful.

Tanya originally joined the study – her first – through the Woolcock Institute in Glebe, New South Wales, Australia. She has a background in medicinal chemistry, microbiology, and microchemistry, and has previously worked in the asthma and COPD fields.

Dr. Allison Humphries has been working in clinical research for more than 20 years. “I obtained my PhD in HIV looking at chronic disease and body metabolism, and I have a background in pregnancy, hypertension, HIV, obesity, and metabolic disease trials,” she tells us.

Dr. Humphries currently works at the George Institute for Global Health in the academic arm as the senior project manager and project lead.

The main goal of the ECOS study is to determine if lung deterioration among smokers – specifically, COPD – can be detected earlier than previously thought.

The participants were randomized into 2 groups to take either Anoro – a GSK drug – or a matched placebo for a 12-month period. The researchers then examined the participants’ small airways to see if there was any improvement.

“It would be ideal if everyone stopped smoking, but that never happens in the real world. So we’re wondering how we can reduce the burden and risks for those who cannot give up smoking if they take this particular drug for 12 months,” says Dr. Humphries.

The Trouble with Jumping In from the Middle

The study had been ramping up for quite some time when both Dr. Humphries and Tayna joined the research group. As a result, processes had already been established and there was no room for major changes.

“2016 was when I think they started recruiting,” Tanya recalls. “I joined the study in mid-2017 and the team had already commenced recruitment at that stage.”

“Yes, I wasn’t here at the beginning either. I came on just before Tanya came on in early 2017,” adds Dr. Humphries.

The trouble with recruitment stemmed largely from the very narrow eligibility criteria for entering the study.

Since the research team was looking to recruit people who currently smoke and can’t quit or have little interest in it, the specific participant criteria made recruitment for the study a challenge from the start and continued even after Dr. Humphries and Tanya joined the trial. 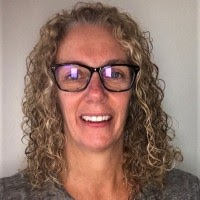 “It’s an unusual thing because the first thing you normally want to do is assist patients to give up smoking,” Dr. Humphries explains. “It was very difficult because they needed to not only be interested enough in their health to want to be healthier, but also to not want to give up smoking.”

Those requirements were a big ask already, but the team was looking for an even more specific group: Participants also had to be healthy enough to be asymptomatic at screening – their spirometry had to be normal and they could have no health issues directly related to their smoking – but yet display some abnormalities showing they were at the early stages of developing lung disease.

“I think it’s the most difficult population you could ever perceive to recruit!” laughs Dr. Humphries.

“And they’re also young, working professionals, so it can be hard for them to dedicate enough time to come in for the visits we had,” Tanya chimes in.

The team used a number of different recruitment methods but found little success.

“We’d tried to do traditional recruitment by putting up flyers around hospitals and in pharmacies. But because it’s a ‘healthy’ population that are busy working, they’re not in hospitals,” Dr. Humphries shared with us.

“So then we sent flyers out to all the local GPs to ask if they could put something up in their waiting rooms. A few did,” she recalls. But it still wasn’t enough to make a real impact.

The team also arranged for letterbox mail drops – partly done by the researchers themselves and later by a specialized company.

“When recruits contacted Tanya and the team, they would ask where participants heard about the study. The numbers we got from that amount of effort was close to zero. It was really appalling and not beneficial,” Dr. Humphries concludes. “I think 3 people contacted us after 2,500 letterbox drops.”

As the study recruitment manager, Tanya began to consider working with recruitment agencies to find participants for the trial. With limited funding, however, she worried about the overarching costs.

“Obviously, anytime you’re doing recruitment, that’s going to eat into your budget,” Tanya says. “A lot of recruitment agencies cost quite a lot.”

Despite their concerns about their budget, they knew they needed help and gave a recruitment agency a try. Though they saw some exciting results at first, the research team had trouble keeping participants enrolled through the end of the study.

“Through the other recruitment company, participants didn’t seem to be well informed up front. They went right through the prescreening questionnaire and then they got to the end and went, ‘Oh, my goodness. This is all too much.’”

“Through the other recruitment company, participants didn’t seem to be well informed up front. They went right through the prescreening questionnaire and then they got to the end and went, ‘Oh, my goodness. This is all too much,’” Dr. Humphries explains.

“I looked through our questionnaire and wondered whether we could figure out where we were getting our losses – to determine which patients were more likely to be retained – and why that was happening,” Tanya says.

“My idea was to overhaul our questionnaire so that anyone who was eligible was coming through and we weren’t getting any false-positive hits,” she adds. 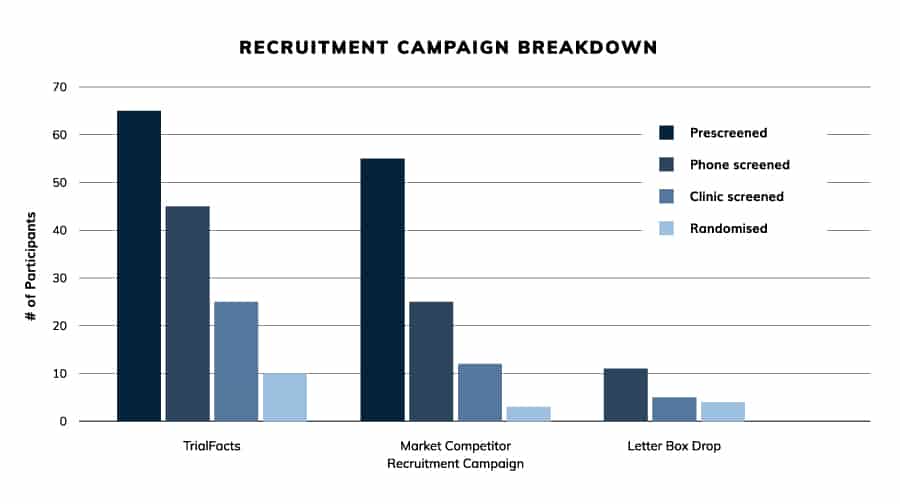 “When I joined the study, they were about 6 months in and they had already completed the first pilot trial with Trialfacts,” recalls Tanya.

“After continuing to have participants drop out, though, we tried to get our participants on our own. That proved really difficult within a small radius, so we decided to give it another go with Trialfacts.”

Armed with an updated prescreening questionnaire, the team began to see major differences between Trialfacts and their other recruitment agency.

“One big issue with the other company was that they didn’t schedule phone calls. That was really important in order to make sure there was that follow-through and to make sure participants were actually phone screened and then came in for a visit to see if their lung function met the eligibility criteria. It was a key link to getting that patient in or even having that conversation,” Tanya concludes.

At the start of the trial, the team was hoping to screen 460 potential recruits in order to enroll 200 randomized study participants.

Using data-driven forecasting from hundreds of completed studies, Trialfacts is able to accurately forecast the number of people required at each step of the enrollment funnel to fill your study.

Despite the exciting number of potential study participants, there were always a few individuals who didn’t quite fit the eligibility criteria due to the specific requirements.

“When we did have those false-positives, we were able to get replacement referrals which was a reason for us to continue with Trialfacts. It gave us the confidence that Trialfacts is proud of their product and they want to deliver,” Tanya explains.

In addition, despite their apparent recruitment success, the team continued to have trouble keeping participants in the study for the long-haul.

“We had patients coming in but it was hard to retain them. I think that was just a part of the study and we just had to cope with it,” Tanya says.

Ultimately, of the 65 participants enrolled that completed the study, 39 came from working with Trialfacts.

“We didn’t reach our goals, unfortunately,” laughs Dr. Humphries. “But essentially, out of all the different recruitment strategies we used – and as we said, we used a lot! – Trialfacts was the standout. And that’s why we kept coming back to you.”

The results of the study haven’t yet been compiled or released, but both researchers have taken a lot from their experience with the ECOS trial. The pair will work together on another COPD-centered trial beginning in 2021.

“...essentially, out of all the different recruitment strategies we used – and as we said, we used a lot! – Trialfacts was the standout. And that’s why we kept coming back to you.”

“We’re starting to work with others on projects we’re joining from the beginning. I’ve had a lot more input into the eligibility criteria – to help the clinicians be a bit more sensible about not restricting their population too much so they inadvertently make it impossible to complete,” Dr. Humphries shares.

While the results of this study aren’t expected to provide any statistical significance due to the small sample size, Dr. Humphries believes the data from the spirometry tests will be helpful for other researchers in their field.

“It’s considered now a pilot and what might come out as more interesting is the secondary outcomes which will be the multiple-breath nitrogen washout (MBNW) and other data because there isn’t much on that,” Dr. Humphries explains.

All in all, the team has learned a great deal about how to structure eligibility criteria and prescreening questionnaires, as well as the need for early review and adaptation of recruitment strategies. Those results will help them better continue their research probes for future studies.

I thought this article, When the “Tried-and-True” Methods Fail: Research Team Seeks Recruitment Help and Finds Success, might interest you.